As the local authority support for school improvement in the region came to an end, the head teachers of these three schools were determined to ensure that the critical professional friendship that helped them to evaluate their performance, identify strategic priorities and plan effective change should continue. Louise Wiegand, head teacher at Springwell Village, noted her initial concern regarding how she could develop her Senior Leadership Team (SLT) without local authority support:

‘My SLT needed further development in the strategic skills needed to lead long-term meaningful change – where were those meaningful opportunities to come from?’

The answer lay in sharing leadership expertise at all levels across the three schools. They embarked on a collaborative model with a self-assessment of each school and critical evaluation of the other schools. One SLT played the role of an inspection team to assess the performance of a partner school. The third school chaired a meeting between the school and its ‘inspection team’. The three head teachers agree that:

To monitor the process of collaboration, the head teachers gathered evidence from OFSTED reports, pupil performance data and awards received by each school. Subject leaders, teachers, governors, office and premises staff, and pupils gave their perspectives on being part of the network of support.

The Premises Manager and SLT member at Dame Dorothy commented:

‘I liked the idea of working with others. If I get the chance to pass on good knowledge or good practice then this is something I am eager to do’.

This led to enhanced use of school premises in the triad schools. Iain Williamson, head teacher at Dame Dorothy, commented on the enhanced sense of confidence and competence as leaders his SLT gained through sharing their skills with others:

‘I believe my SLT were the most established of the schools at the formation of the Triad but they lacked confidence. Working alongside colleagues with similar fears but who had not been allowed the opportunities they had gone through gave them a sense of value in the roles they performed. It was at this point that they started to see themselves as I did – as leaders’.

An OFSTED inspection report for St John Boste School (2016) noted that the ‘dedicated and committed leadership is effective and has led to improvements in the school’. The report noted that governors benefited from their involvement in the shared leadership approach:

‘Leaders work collaboratively with those from two other schools to share practice. This ‘Triad’ enables governors to attend training and share expertise with other governing bodies’.

Denise Cushlow, head teacher at St John Boste, reflects on the impact of the Triad on the extended leadership team:

‘As we met towards the end of the first year to evaluate the Triad and the impact it had had, it was clear that it was something that would continue to grow and develop. Realising the positive impact it had had on us as leaders and on our SLTs inspired us to consider ways in which other members of our teams could benefit and grow.’

The collaborations have extended to include pupils, with School Council members from the three schools meeting regularly to learn from each other. A recent Dame Dorothy School Council Newsletter reports on how council members feel their leadership skills are developing as they ‘share ideas to improve our schools.’

‘We visited Springwell Primary School; … we learned about young leaders which is also used in our school. We heard that they linked their young leaders to an anti-bullying scheme. So since we were given a silver award in anti-bullying we thought it was a good idea to follow’.

The entrepreneurial Triad Model has enabled leaders at all levels in these schools to develop and to gain an enhanced sense of their contribution. The Model has created an energy that cascades into many aspects of school life. The schools are committed to sustaining this energy and allowing it to grow further. 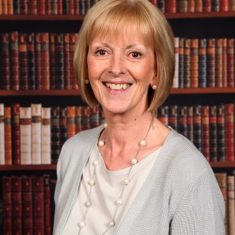 Sue Robson is Professor of Education in the School of Education, Communication and Language Sciences at Newcastle University. She is a member of the Research Centre for Learning and Teaching and leads the Teaching and Learning in HE Research Group. Her research interests include educational leadership, internationalization of higher education and professional learning in higher education.  Sue was principal investigator on an Erasmus+ strategic partnerships project on ‘Entrepreneurial Competences for School Leadership Teams’, 2014-2016.  She is currently principal investigator on an Erasmus+ strategic partnerships project ‘Approaches and Tools for Internationalisation at Home’, 2016-2018.
http://www.ncl.ac.uk/ecls/staff/profile/sue.robson

Sue Robson, Rene Koglbauer, Ulrike Thomas and Anna Reid from the Research Centre for Learning and Teaching and North Leadership Centre, Newcastle University, led an Erasmus+ project ‘Entrepreneurial Competences for School Leadership Teams’ (2014-2016). We worked with partners: edEUcation ltd, the European School Heads Association, the Universities of Jyväskylä, Finland and Primorska in Slovenia, the Bucharest University of Economic Studies, and schools across Europe to design a programme to enhance the entrepreneurial competences of schools leadership teams (SLTs). The project has also developed case studies of schools that had developed entrepreneurial leadership approaches.

A moment to breathe: How reflection can reduce teacher maths anxiety