The challenges of writing a scientific article are widely discussed and acknowledged in research literature, including novice authors’ challenges (see for example Hyland, 2016; Lin & Morrison, 2021). In my PhD project, I aim to explore the challenges of Algerian PhD students who attempt to get published. Instead of focusing on students’ linguistic needs only, I am particularly interested in exploring all possibly existing types of needs they might have when writing their articles.

While many studies suggest that being part of one’s academic community is an important factor which contributes to the construction and development of the early career researcher’s (ECR) academic identity, it can be seen that some doctoral students begin not only to move away from socialising with others outside their doctoral circle but also disconnect from their academic communities, whether intentionally or not.

‘Some doctoral students begin not only to move away from socialising with others outside their doctoral circle but also disconnect from their academic communities, whether intentionally or not.’

Scholars speak of joining one’s ‘discourse community(-ies)’ which Swales (1990) defines as ‘groups that have goals and purposes, and use communication to achieve their goals’ (as cited in Borg, 2003, p. 398), and ‘communities of practice’ that Wenger and Wenger-Trayner (2015, p. 1) perceive to be ‘groups of people who share a concern or a passion for something they do and learn how to do it better as they interact regularly’. Both concepts highlight the significance of being part of an academic community and the benefits it could bring to the researcher including the cultivation of a supportive and collegial atmosphere.

The literature on academic writing addresses a number of ways in which doctoral students can get involved in the community of their choice. Murray (2013, p. 179), for example, refers to writing retreats that ‘create a more positive, cooperative, environment for writing’. As such, the act of writing is essentially considered a social practice encouraging authors to engage more with their texts and one another when writing their articles. Murray adds that a writing retreat can take place online or in-person and can be initiated by experienced or novice authors.

Another support avenue that doctoral students can explore is blogging. Blogging mostly takes place in an online environment. Guerin et al. (2015, p. 219) highlight how blogging can help doctoral students develop their writing through ‘the process of preparing weekly posts [that] can teach the authors a great deal about writing, not only through the feedback received from other editors or draft blogs, but also through observing other editors’ writing processes’. In her Teaching Matters blog post on the benefits of blogging for PhD students, Shinton (2017) explains that blogging can provide doctoral students with the chance to build new connections with people sharing the same interests, and are a way of increasing their engagement in both academic and friendly, informal conversations.

On a personal note, the invitation to write this blog, which I have received after communicating my research at the BERA ECR Network Symposium in May 2022, has been an opportunity for me to pause and reflect on many aspects of my doctoral journey and the decisions and choices I have made so far. In addition, writing this blog offers me the possibility of cultivating meaningful connections with BERA members and non-members including the editorial team, ECR peers, and readers, and will help me in creating my researcher profile.

Support to develop new authors’ scientific writing capabilities can come from different sources and occur in different forms. Supervisors, in particular, possess the capacity to positively influence their supervisees by convincing them of the importance of becoming active members of their wider community. They can also nurture their abilities to develop transferable skills that supervisees can use in their attempts to connect with others as they both work on fostering an effective supervisor–doctoral student relationship.

Wenger, E., & Wenger-Trayner, B. (2015). Introduction to communities of practice. https://wenger-trayner.com/introduction-to-communities-of-practice/ 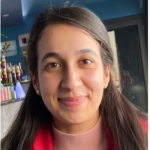 PhD student at University of Northampton

Nour El Houda Benlakhdar is a third-year PhD student in educational linguistics at the University of Northampton, UK. Her project is fully funded by the Algerian Ministry of Higher Education and Scientific Research. In her study, Nour aims to investigate the challenges and needs of Algerian PhD students in the sciences when writing scientific articles. Her areas of interest include EAP needs analysis, writing for publication, genre analysis, and qualitative inquiry.

All from this series
Reflexivity in conducting qualitative educational research