Citizen science projects are becoming increasingly important sites for researching the learning of adults. Citizen science is identified as offering: new ways to engage in scientific research; new ways through which to engage the public in research; and new possibilities for science learning. It has been particularly successful in projects focussing on aspects of the natural world, such as monitoring the effects of climate change, monitoring bird population and migration patterns, assessing water quality and in the field of astronomy. While the primary outcome of citizen science is scientific research, increasing attention has been given to the learning arising from people’s participation in projects.

The question then arises of who is participating in these projects, their educational backgrounds, and what and how much they are learning. This blog draws upon the findings of a project to explore these issues in relation to two citizen science projects run by the British Trust for Ornithology (BTO) – the Wetland Bird Survey (WeBS) and the Nest Record Scheme (NRS). The project was funded by the British Academy. WeBS is the main monitoring scheme for non-breeding water birds in the UK, providing the data for the conservation of their populations and habitats. In 2015, it had around 3000 volunteers. The NRS gathers data on the breeding success of UK birds by asking volunteers to find and follow the progress of individual birds’ nests. In 2015, it had around 660 volunteers. It was these two sets of volunteers who were surveyed online between April and November 2015, from which we had a 26% response rate.

In terms of demographics, in general, respondents reflect patterns found elsewhere in many citizen science projects. The numbers contributing increase up to the age of 70 – the biggest proportion of 38% being in the age range 61-70 – after which numbers decrease. Almost 83% of respondents were male. Almost 98% were white UK. Of useable responses, 53% identified themselves as employed, 46% as retired and 1% as students. 67% of respondents had university level qualifications, with high proportions also having school level qualifications in the core sciences of Biology (70%), Chemistry (66%), Mathematics (68%) and Physics (52%). In terms of higher education qualifications, the range of subjects studied diversifies. There were large numbers of volunteers with a social science university qualification.

Given the focus of these citizen science projects is birds, it is noticeable that only just over 35% of respondents reported previous study of Ornithology. Of these, only around 40 people identified school or higher education qualifications in this area. This suggests the development of specific ornithological expertise among volunteers mostly takes place in less formal educational ways.

What then of the relationship between educational background and learning outcomes? Respondents were asked to self-report on a scale of 1 (less) to 6 (more) the extent to which they had learnt across 10 areas arising from their participation in citizen science. The 10 areas were: the topic of the project; data collection; data analysis; framing a scientific question; scientific methods; scientific careers; the ethics of scientific research; the impact of research on others; evaluation of evidence; and the purpose of science.

While large percentages of volunteers identified themselves as learning in all areas, it is only in relation to ‘learning about the topic’ of the project and ‘learning about data collection’ that the majority of volunteers identified themselves as learning significantly more. While an unrefined measure, it is possible therefore that the educative potential of these citizen science projects may not being as fully developed as it might be and/or the projects are largely drawing upon the majority of volunteers existing sets of capabilities.

What is noticeable also is that volunteers without a degree had higher mean learning scores for 8 of the 10 areas of learning compared with those with a degree or above. In others words, the less qualified the volunteer, the more they learnt. The lesser numbers of participants with no degree would seem to be learning statistically significantly more through participating in citizen science than those with higher education qualifications, even though motivations for participating are similar.

The study raises interesting questions for citizen science projects in particular, but also those who seek to promote a culture of lifelong learning more generally. We know that the more qualified tend to participate more in educational and cultural activities throughout life. However, if they are learning less than those without qualifications, then, from an educational perspective, perhaps we need a more refined understanding of what such a culture might look like.

Note: This research was funded by the British Academy. Our thanks to colleagues at the BTO for their collaboration in enabling this project to be conducted. 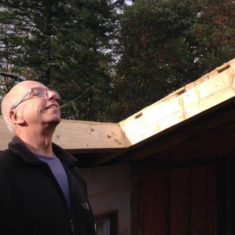 Richard Edwards in Emeritus Professor of Education at the University of Stirling, where he was Head of the School of Education between 2006 and 2013. He has researched and written extensively on numerous aspects of lifelong education and educational theory over the years, with a particular interest in learning practices outside of educational institutions, post-structuralism and actor-network theory. Since 2013, the main focus of his research has been on learning through citizen science, with funding from the British Academy and Wellcome Trust. His writings can be found on Researchgate.