Why is identity problematic for teacher educators?

Identity transformation for early-career teacher educators has been shown to be problematic in the move from ‘expert teacher’ to ‘novice teacher educator’ (Murray and Male, 2005). As individuals transition from teacher to teacher educator, their teacher identity can become a source of ‘credibility’ with the student teachers they work with, and this can stall the development of a more integrated identity as a teacher educator (Boyd and Harris, 2010).

Induction processes for teacher educators need to support them to develop their identity as ‘teacher educators’ – and narrative story-telling practices are particularly powerful means to this end.

In my recent article ‘Identification – A process of self-knowing realised within narrative practices for education professionals during times of transition’ (Amott, 2018), I argue that induction processes for teacher educators within their first few years in role need to support them to develop their identity as ‘teacher educators’ – and that narrative story-telling practices are particularly powerful means to this end. I also describe, from a small-scale study of six early-career teacher educations that uses an adapted form of ‘professional life history’, a process of ‘identification’ that is evidenced during such narrative practices.

Why might narrative practices be effective in supporting identity transformation?

In this blog I present a theoretical model that explores, and suggests answers to, this question. This is supported by an analysis of participants’ narratives from my study (presented at BERA Conference 2017). The model was stimulated by reading the work of Judith Butler (1997) and other ‘post-structuralist’ literature. From this material I could derive two distinct binary dimensions or continuum: subjectivity/objectivity and structure/agency.

The first dimension suggests that within the narrative act an individual may move from a subjective to a more objective awareness of self. The second dimension indicates the tension between structures of various kinds – those external to the individual such as institutions, cultures, politics or the internal ‘unconscious psyche’ – that may constrain identity, and the agency of an individual in their freedom to construct identity as they wish. When these two dimensions are superimposed on each other they provide a framework that considers a progression that may occur within narrative story-telling that moves an individual from a subjective, constrained position to a more objective and agentive awareness of self. This is represented visually in figure 1. 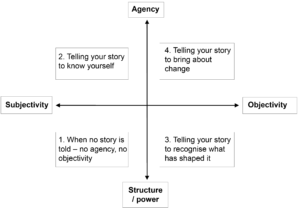 Was this theoretical model borne out by the participants’ narratives?

In my BERA paper I provide evidence from the narratives of these early-career educators that appears to substantiate each of these elements. This is available via open access here.

This model suggests that within the story-telling act a person gains a more objective awareness of self, and that story-telling is in itself an agentive act and thus supports identity transformation. It also implies that agency is increased when stories are constructed and shared with a wider audience. The applicability of the model used in other contexts will verify its utility in making sense of narrative practices, particularly during times of professional transition. 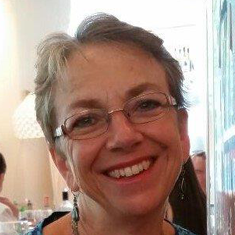 Penny Amott is a lecturer in initial teacher education at the UCL Institute of Education, London. She is currently the co-programme leader on the primary PGCE and the primary English lead. She has more than 30 years’ experience working in primary education, and for the last 13 years has worked in ITE and as a national trainer for Reading Recovery.

Her recent doctoral research looked at teacher educator identity, and used narrative life-history approaches to study the identity transformation of early-career teacher educators. Copies of her latest article, ‘Identification – a process of self-knowing realised within narrative practices for teacher educators during times of transition’ in Professional Development in Education (Amott 2017) can be downloaded here.

Is a shared understanding the key to effective learning?

A new tool to help teachers as digital learning designers