My PhD focusses on how online teacher-learning communities may support professional development, and as a relatively new researcher I was aware that, to address the subject, I needed to build my awareness of research methods. In the first few months I attended a range of training events, including a fascinating session on ethnography, but early on I somehow began to assume that I would be conducting a case study, and started looking more closely at this approach.

However, at various points over the next few months the term ‘netnography’ kept popping up, and my interest was piqued. It seemed to have particular links with marketing, which didn’t relate to my own study, but I decided to find out more by reading Netnography: Redefined by Robert Kozinets (2015).

A variety of terms are used for ethnographic approaches to online or digitally focussed studies, from online and virtual ethnography to netnography (Hine 2017), but it appears that uncertainty over their use is common (Kozinets 2013). The term ‘netnography’ was first adopted by Kozinets in the 1990s, and he argues that online and digital ethnography are generic terms, whereas netnography follows more specific procedures with clearer guidelines throughout the research process (ibid).

An up-to-date definition of netnography states that it is:

This fitted well with my own study, which focusses on a Twitter-based education community in which I was already a participant, so I continued to explore the approach and found that it resonated with the work I had already undertaken.

It appears that there is a tendency to distrust or question the rigour of newer methodological approaches, while simultaneously criticising the over-proceduralisation of some research methods (Wiles et al 2013). However, netnography has been adopted across a range of disciplines, from tourism to education, and its openness to opportunities for co-creation and the sharing and checking of data with the communities studied is significant (Costello et al 2017).

In Kozinets’ updated work on netnography (2015) he identifies 12 phases to the research process, including introspection, interaction, immersion and interpretation. This may seem a perfect example of over-proceduralising things, but from another perspective it gives the researcher a guide or pattern to consider. Having already undertaken some of my planning and given much consideration to ethical issues, I found that my project was fitting naturally into these phases rather than being constrained by them.

‘Netnography foregrounds serious consideration of the ethical challenges of online research – from questions of what is public or private, to those of consent and anonymity.’

For me, Kozinets’ focus on active participation and reflection in the process is particularly important, and is something that he has stressed as an alternative to more passive ‘big data’ approaches. Netnography foregrounds serious consideration of the ethical challenges of online research – from questions of what is public or private, to those of consent and anonymity. While this is not exclusive to a netnographic approach, it is clearly a key consideration as far as Kozinets is concerned (ibid). In my own research I have tried to highlight my role as participant-researcher, and to talk about the project openly with participants, particularly via Twitter and my blog. This openness and clear desire to ‘do no harm online’ (ibid) are significant when it is noted that many Twitter-based studies make no mention of ethical issues at all (Zimmer and Proferes 2014).

It’s also clear that netnography is not a static approach but rather one that is developing alongside our ever-changing use of social media, and in response to Kozinets’ reflection on his previous work and the critiques of others (Kozinets 2015). This is something that he has recently highlighted himself. 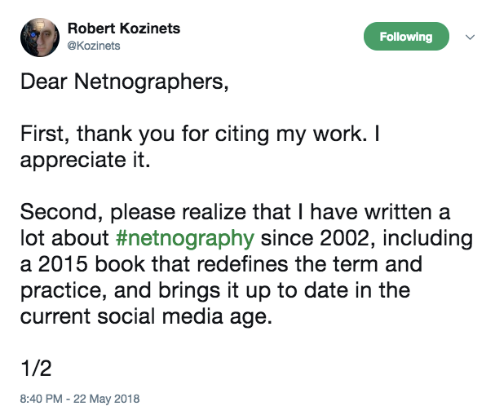 Although netnography seems to fit the bill in terms of helping to answer my own research questions, I expect to encounter challenges as I work through the next stages of my research and revisit those already undertaken. Having a clear framework to support this is incredibly helpful to me as a newer researcher, as is the advice and experience of others.

Diana Tremayne is currently a full-time PhD researcher at Leeds Beckett University. Her research looks at how online teacher-learning communities may support teachers’ professional development. The main focus of her research is on a further-education based Twitter community, and she is using a netnographic approach for the project. After training as a modern languages teacher, Diana worked in schools and universities, and then moved into teaching ESOL in further education for many years; she is still involved with a number of ESOL projects. She has also worked as an advanced learning practitioner, and has written a number of pieces for the Times Educational Supplement. Her email address is d.tremayne@leedsbeckett.ac.uk, and she tweets at @dianatremayne.