Services for young children and their families have held a prominent place on international policy agendas for decades and have seen remarkable transformations of the underlying concept of what these services are, who they are for, and what purpose they serve: In 1992, the European Union encouraged its Member States to invest in childcare as a matter of urgency (Council of the European Communities, 1992). In 2014, all relevant EU policy documents, including the 2011 Council Conclusions (Council of the European Union, 2011) and the recent ‘Quality Framework’ (Working Group on Early Childhood Education and Care, 2014), consistently talk of early childhood education and care; a development that is mirrored in many other international and national policy contexts.

Let us be clear: High-level early childhood policies are rarely about children

Surely, that the two components – education and care – are now seen as inseparable is something we should celebrate? Yes, and no, I think. While early childhood practitioners, scholars and activists (including myself) have long argued for the recognition of the educational value of any interaction between children and adults from birth, we should be concerned about the most recent developments. Let us be clear: High-level early childhood policies are rarely about children. In the case of the EU they need to be read in the context of macro-political, socio-economic strategies. The focus has shifted from the individual child (that has to be ‘cared’ for) to a ‘critical period in human life’ (Woodhead, 1996) in more general terms. Early childhood in itself has become a matter of concern, rather than the provision of childcare as a commodity for working parents. Europe, according to its current strategic framework, faces a complex scenario of structural crises (European Commission, 2010). They include unsustainable levels of inequality and poverty, threatening the social contract, and the viability of the entire project.

The underlying concept of education appears to be increasingly utilitarian

Early childhood education and care has been identified as a key policy tool to address these existential issues because of its assumed ability to ‘close the gap’ between children from marginalised and dominant groups in society and to reduce later dropout rates. Here lies the key to the new interest in early childhood education – and we have every reason to be worried about it. The underlying concept of education appears to be increasingly utilitarian. It has become a commodity to increase a narrowly defined ‘human capital’ in a neoliberal economy, ‘no longer conceived as an integrated strategy to promote freedom, self-enrichment and human development’ (Tan, 2014, p. 492). The (renewed) emphasis on schoolification of children’s early years links to another critical issue at the very heart of early childhood practices and policies: the unresolved tension between contradicting meanings of ‘care’ in educational contexts. Instead of an acknowledgement of the importance of human beings ‘caring’ for each other, individually and collectively, care – in hyphenated early-childhood-education-and-care policies – has become synonymous with the service part of the programme. We have hardly begun to grapple with the notion of care as a public good that has to be valued (as opposed to priced) as the foundation of society. Our education system is, argues Kathleen Lynch, an organised ‘culture of carelessness’ (Lynch, 2010, p. 54).

Policies aiming at closing the gap are grounded in a logic of integration and assimilation into an assumed normality that no longer exists. They perpetuate an image of them and us: the underachieving and the marginalised as the generalised other. Unfortunately, as I have discussed in more detail elsewhere (Urban, 2012), mainstream early childhood research contributes to this notion and, together with policy, has entered a self-referential cycle of more-of-the-same questions leading to more-of-the-same solutions. But, as Rosi Braidotti (2002) reminds us, things are more complex. Fragmentation and hyper-diversity have become the new normal of society, and the ‘grounds on which periphery and centre confront each other’ (p. 14) are shifting.

Years of mainstream early childhood research has made little difference to the lives of the most marginalised children in Europe (and in the US, for that matter), as documented in recent reports (Lansley and Mack, 2015, Šikić-Mićanović et al., 2015). There is nothing inevitable about poverty, inequality and exclusion; they are the consequence of human action and political practice. Cui bono? – Who benefits from the status quo, is a key question I suggest to take as the starting point of a radical reconceptualisation of the way we conceive research in early childhood.

COUNCIL OF THE EUROPEAN UNION 2011. Council conclusions of 15 June 2011 on early childhood education and care: providing all our children with the best start for the world of tomorrow. Brussels: Official Journal of the European Union.

WOODHEAD, M. 1996. In Search of the Rainbow. Pathways to Quality in Large-Scale Programmes for Young Disadvantaged Children, The Hague, Bernhard van Leer Foundation. 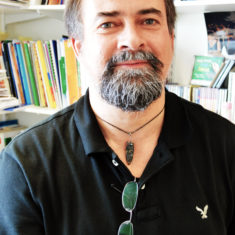 Dr Mathias Urban is Professor of Early Childhood and Director of the Early Childhood Research Centre at the Froebel College, University of Roehampton, London. He works on questions of diversity and equality, social justice, evaluation and professionalism in working with young children, families and communities in diverse socio-cultural contexts. From 2010 to 2011 he coordinated of the European CoRe project (Competence Requirements in Early Childhood Education and Care). His recent projects include collaborative studies on early childhood professionalism in Colombia (Sistemas Competentes para la Atención Integral a la Primera Infancia), and Roma Early Childhood Inclusion Studies (RECI+) in Central and Eastern Europe . Mathias is an International Research Fellow with the Critical Childhood Public Policy Research Collaborative, a member of the PILIS research group (Primera Infancia, Lenguaje e Inclusión Social), Chair of the DECET network (Diversity in Early Childhood Education and Training), Vice President of the International Froebel Society (IFS), and a member of the AERA special interest group critical perspectives on early childhood education.