The role of attachment theory in education has frequently been questioned, as typified in the recent Twitter exchange on ‘edutwitter’ below. 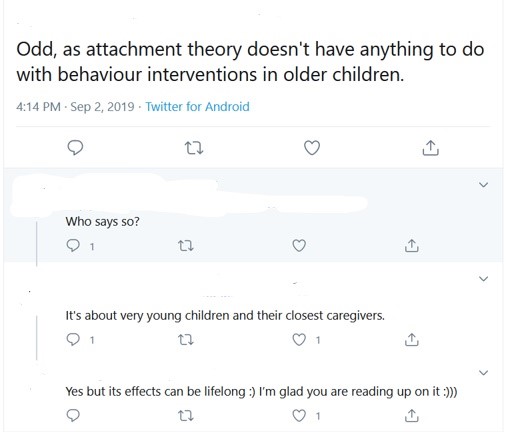 A growing body of research now indicates that attachment problems in early childhood affect the stress settings within the brain and the endocrine system, which can have a lasting impact not only upon human behaviour but also upon readiness to learn. This was explored in my article, ‘Attachment theory, cortisol and care for the under-threes in the twenty-first century: Constructing evidence-informed policy differences in the quality of early care’, recently published in the Early Years journal (Jarvis, 2020).

‘Attachment problems in early childhood affect the stress settings within the brain and the endocrine system, which can have a lasting impact not only upon human behavior but also upon readiness to learn.’

Attachment theory was created from a synthesis of psychoanalytic and evolutionary concepts. Bowlby (1952) proposed that babies have a natural, evolved instinct to form a strong emotional bond with their mothers, which if weak or missing would result in lifelong emotional problems. He linked this to natural selection, in that attachment-seeking protects the individual from danger. While Bowlby’s exclusive focus on the mother was robustly challenged, his internal working model (IWM) endures. The IWM is a mental ‘template’ upon which the infant constructs both a level of ‘lovability’ in the self-image and a model of predicted responses from others. If early relationships are affectionate, the IWM expectation becomes, ‘Other people are usually kind and I am lovable;’ but if relationships are troubled, the setting created is, ‘Other people are unpredictable, not always kind and I may not be lovable’ – and in extreme cases, ‘Other people are unkind and I am not lovable’.

Attachment theory was recently enhanced by a range of studies that discovered abnormally raised levels of the stress hormone cortisol in young children in non-familial care. The ongoing picture is complex, indicating that stress levels are differentially impacted by transactions between care quality in the family versus care quality in non-familial settings, the age of the child and the balance of time spent between domestic and professional environments.

The effects of excess cortisol in the human body are not constrained to social functioning, however: it ‘leaks’ into cognitive functions, and in so doing has far-reaching effects upon children’s readiness to learn. Raymond and colleagues (Raymond, Marin, Majeur, & Lupien, 2018, p. 152) explain:

‘The main brain structures that are affected by the chronic secretion of stress hormones during childhood (hippocampus, prefrontal cortex and amygdala) are differentially involved in various cognitive functions (memory, emotion regulation, encoding of emotional memories, etc.).’

Wagner et al. (2016) further linked higher cortisol levels to poorer ‘executive functioning’ across three cognitive domains: inhibitory self-control, flexibility and emergent metacognition. The impact that this has upon human beings in a working or learning environment are summarised by Scorza and colleagues (Scorza, Arayad, Wuermlib, & Betancourt, 2016, 34):

‘Executive function is an umbrella term that refers to the following mental processes: working memory or the capacity to hold and manipulate information over short periods of time, inhibitory control or the ability to master and filter thoughts and impulses and to pause and think before acting, and cognitive or mental flexibility such as the ability to shift attention between tasks.’

Within the school environment, the following features are commonly observed in children with a history of troubled family relationships (Jarvis, 2020):

These findings are surely of general interest to schools, raising questions relating to the necessity of pastoral support, alongside the inadvisability of harsh discipline regimes. 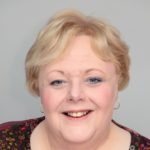 Dr Pam Jarvis is a chartered psychologist and a historian. Her key research focus is the wellbeing of children, young people and their families, and the development of social policy to support this. She has numerous publications to her name, including the books Early Years Pioneers in Context, The Complete Companion for Teaching and Leading Practice in the Early Years and (with Dr Yinka Olusoga), Perspectives on Play. Her PhD focussed on play-based learning in four-to-six-year-olds. She is currently an honorary research fellow at Leeds Trinity University.

Editorial: Practitioner research and commentary in a networked society

The edublogger, the school and the academy

Call for papers: What place for activism in, for and as education?