The formalisation process which the review shows has been happening in Early Childhood Education, particularly since 2010, has moved into a new phase in 2016-17. The OECD has been considering a ‘baseline’ initiative to sit alongside its PISA testing programme and has convinced the government (for England at least) to sign up for trialling it. The proposal is for a new set of tests, the International Early Learning and Child Well-Being Study (IELS) aimed at children between four and a half and five and a half years old, that is before the end of the (F2) Reception Year in England. The government in February asked for expressions of interest to tender for the contract to produce and manage the tests following the OECD brief. Fifty percent of the focus of these one-time tablet-based  tests is on Literacy and mathematics, making a nonsense of the EYFS Prime Areas of Learning.

OECD describes the purpose of these tests in this way: ‘Information from this new OECD study on children’s early learning will provide insights on the relative effectiveness, equity and efficiency of ECEC systems and also on the focus needed in early primary schooling. The study will also include a focus on the impacts of children’s home learning environments.’ [1]

Professor Peter Moss of the Institute of Education, UCL, warns us: ‘The plans for the IELS have been gestating over several years, and OECD member state governments have been consulted during this period. But the wider early childhood community of practitioners and academics has not been; the OECD has shown little interest in opening up their proposals to public scrutiny and debate……. The DfE in England has similarly made no attempt to inform and consult, either on the wider OECD plans or on England’s participation in IELS.’ [2]

Because in England, children are increasingly in school now from two years old, the potential for washback from any fixed assessment point is clear. Indeed as Pam Jarvis showed in her Huffington Post article ‘As more and more is expected of children at earlier and earlier stages, the downward pressure into the nursery years means that play-based learning is squeezed out, with disastrous consequences.’ [3]

The ‘readiness debate’ is very real in this country

We already have the relatively early start to more formal structures in Year One and the beginning of national testing at six and seven. Compare this with Germany or the Scandinavian countries where the notion of children reading and writing at 5 is seen as rather odd and unnecessary. The ‘readiness debate’ is very real in this country as can be seen from the polar opposites of the OFSTED document ‘Are you Ready?’ [4] and the Whitebread and Bingham paper ‘School readiness: a critical review of perspectives and readiness.’ [5]

The former is very centred on the need to have all children fitting a ‘mould’ by the time they enter formal schooling while the latter is much more concerned with schools’ abilities to offer each child what they need to develop over a less restricted time scale. Pressure groups such as Upstart in Scotland and the social media phenomenon which is the Facebook Group Keeping Early Years Unique (with 30000 signed up members) demonstrate clearly that there is a very powerfully felt and rigorously argued view by practitioners who work with young children every day that we need to put a brake on formalisation, not speed it up with a new test. These groups hold the view that children will become developmentally ready with sensitive and gifted practitioners at their own pace, as opposed to responding to pressures to conform to an abstract set of standards dictated from above with no view of individual contexts. A testing programme not only intrudes on children’s development at an artificial point but also has a washback effect on the pedagogy that precedes it.

On the other hand, Nick Gibb, from the Department for Education in the UK, who was pictured earlier this year beaming in front of a writing display of modelled (and maybe model) sentences in a pre-school classroom, spoke this week about the harm done by child-centred pedagogies, quoting OECD evidence to justify his claims.[6] This is the indicator of where a new PISA structure for five-year-olds will go. Not maybe, but certainly. 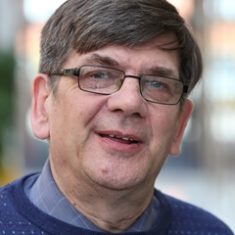 Philip Hood has a background in modern languages teaching and research but became interested in early childhood education when working with two EYFS practitioners on a Nuffield research project into early primary French and Spanish materials. He subsequently introduced an Early Years pathway into the Outstanding Primary Schools SCITT ITE programme which he managed for twelve years. He has carried out research into the use of play-based learning in KS1 and has created an online module for the Nottingham MA Education course on Developmentally Appropriate Practice in Early Years Education. He has blogged on EY assessment issues for Upstart Scotland and for the Nottingham Primary Network and is a keen supporter of the Facebook group Keeping Early Years Unique.

All from this series
Play and Pedagogy

Giving a Voice to Mothers

Early years as a career? Policy, practice and professionalism 2003-2017

The Missing Link? Brain and Body in early learning and development – what the research review does and doesn’t tell us