Government-led workforce reforms in the early years sector have led to significant change in the range and level of qualifications available to practitioners, and social and economic policy over the last 15 years has significantly reshaped the role they fulfil. Arguably, this should have contributed to a raise in status and capital for a workforce that plays such a prominent role in supporting young children and their families.

My research demonstrates that practitioners are confident in articulating the values and ethics that underpin their practice, the importance of social and emotional well-being to successful learning, the need to respect children as individuals and promote their interests, and of the value collaborative, cooperative and respectful team working. Whilst this fulfils some of the characteristics identified as determining professionalism (Noordegraaf, 2007; Oberhuemer, 2005), expression of their agency is limited. They are frustrated by factors at organisational and sector level including policy, regulation, inspection requirements and bureaucracy, do not feel able to challenge these. They are reluctant to identify what level of knowledge required for practising without supervision. What has led to this lack of confidence and assertion, from practitioners with years of experience in early years practice, as well as undergraduate qualifications?

Arguably, this is because the early years sector can still be characterised as a restrictive work environment (Fuller et al, 2007), with a professionalisation agenda which offers the government control and management of practice in what is a largely privately run sector. The former, evidenced by its lack of a sector-wide career progression route, and limited organisational opportunities for professional education and development for practitioners, dependant on the good will and business planning of their employers, can clearly be seen to restrict the autonomy of individuals to decide for themselves what their practice should be or how it might be developed, without requiring a change in employer, or the personal funding of qualifications, both of which could be seen as high risk ventures and sometimes impossible to achieve.

leaves practitioners in danger of being perceived as technicians fulfilling pre-set approved practices, rather than as creative and critical experts

The imposition of a professionalisation agenda described by Woods (2015) as ‘governmentality’, and by Evetts (2003) as a ‘from above’ approach, and its acceptance by the sector, has also contributed to limiting the autonomy of the practitioner. Professional status is as much a matter of occupational group autonomy in determining its membership, entry requirements and knowledge base, as it is a matter of occupational monopoly of skills and services, offered to users at a premium. It is also a matter of demonstrating that the knowledge base claimed requires a high level of education to understand and apply it. Using competence frameworks (e.g. NCTL, 2013) to advance practice draws attention away from the value and importance of reflection as a critical thinking tool when evaluating and shaping practice, and focuses it instead on the production of evidence from discrete workplace activities to demonstrate skill. No matter how high the level, this leaves practitioners in danger of being perceived as technicians fulfilling pre-set approved practices, rather than as creative and critical experts (Moss 2006).

The next step for the early years workforce, I would argue, is that they need to participate in determining their own expertise and knowledge base, rather than accepting the modelling of it on educational roles which may only in part fulfil what they consider their purpose to be. To do so requires greater confidence in reflective evaluation of applying theory to practice, and the organisation of a collective voice on matters of practice and pedagogy. HEIs and other professional educators may want to consider what role they could play in facilitating this. 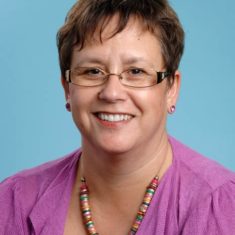 I am a Senior Lecturer in Early Years in the School of Education and Professional Development and a Fellow of the Higher Education Academy, with a BA Hons in Linguistics and Psychology and an MA in Educational Studies. I began my career teaching GCSE and A Level English Language and Psychology in Further Education. I then specialised in teaching Social Sciences and Social Policy on vocational courses in Childcare, and Health and Social Care, at Levels 2, 3 and 4. During this time I worked with local employers to establish three NVQ Assessment Centres in Childcare, Play Work and Health and Social Care. I have also worked with the Open College Network (Yorkshire and Humber) as a moderator and staff development tutor, training and supporting assessors and moderators in adult education.

Before joining the University, I worked most recently with the Local Authority in Barnsley as a Development Officer, then Project Co-ordinator piloting the funding for nursery places for 2 year olds, and supporting early years settings in developing provision, and meeting OfSTED’s inspection and registration requirements.

This presentation is on Wednesday afternoon, 14thSeptember, Professional Identity and the Early Years Practitioner.

Is a shared understanding the key to effective learning?

Leadership in Early Childhood: Is it just for those working at the very top?