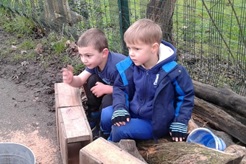 The Tavistock method of infant observation has developed and grown since its original use as a tool to train psychotherapists at the Tavistock clinic. It is now widely used across many professions and increasingly seen as an effective method for researching young children’s development. Before undertaking the Tavistock method of observation, I was confident that as an Early Years Teacher, I had been observing children closely for many years and in truth I did not expect to be surprised by what I learnt. However the experience of using the Tavistock model was both unexpectedly and intensely moving resulting quite dramatically in what Miller (2011) so aptly refers to as ‘a disturbance in the mind’ (p239 )

What is the Tavistock observation Method?

The role of the observer is to immerse themselves in the interactions that take place between the infant and others present.  The observer is to remain non-interventionist and as unobtrusive as possible, thus in theory experiencing everyday interactions. Rustin (2009) defines the intention as “being present in the moment as fully as possible, open to perceiving as much as possible” (p30) A clear characteristic of the observation method, is that no notes, photos or videos are taken by the observer, but instead a report or transcript of the observation is written up as soon as possible afterwards for discussion. The transcript aims to encapsulate not only what was seen, but significantly what was felt by the observer; the emotions, thoughts and feelings that were evoked. This is a central aspect of the method which rather than relying on external indicators, seeks to understand internal emotional states.

At Barnet Early Years Alliance, we collaborate with schools and EY settings to engage in action research to inform practice. We carried out a series of Tavistock observations within our settings to consider the usefulness of the approach and it’s possible adaptation for wider use across Early Years Practice.

An initial common concern is the lack of any note taking or use of video.  Practitioners are unconvinced that they will remember enough detail without the luxury of notes to refer to or a rewind button. However after just one observation we recognised the depth of observation that the method afforded. As is stated by Jackson (2008)

‘The camera might offer an ‘objective’ record of what is taking place, but the observer’s psychic lens with all its unconscious processing of the experience reveals the developing world of the infant with an emotional truth, the nature of which cannot be rivalled.’ (p123)

Another concern and potential challenge is the time needed to carry out an observation. A Tavistock observation involves observing a child for at least 30 minutes. Practitioners questioned the feasibility of this without interruption or affecting behaviour.

What we found out?

The experience of carrying out these observations was impactful for every practitioner in both shared and different ways. They led to a greater insight into individual children as well as deep consideration of our environment and practice as experienced by the children. We felt as if we had walked in the shoes of the child, seen the world through their eyes.  After an observation of a child described as having ‘challenging behaviour’ a Reception teacher said  “We saw a child who was lonely, desperate to be liked, desperate to have friends, desperate for attention but unable and unsure how to achieve this.” Another class teacher described how her new insight into a child led to a dialogue with his parent who consequently shared significant family background, thus developing closer partnership and support. Other practitioners introduced simple, yet essential improvements such as more softness in the baby room.

Our initial concerns about the time to observe and our influence on behaviour continue to challenge and we are still forming our ideas on how we will take this method forward next year. Significantly, we learnt that sensitivity about how and who the observations are shared with needs careful consideration. One Nursery Manager found the staff in the baby room took her comments about a child’s emotional well-being as a personal criticism about their practice. The importance of training and a seminar group is essential.

In our current attainment driven educational system with a pervasive emphasis on pre-determined outcomes, the Tavistock method enables the potential and privilege of gaining insight into of the internal world and emotional states of young children. We have become ardent advocates.

Kelly Brooker is the Deputy Head of Barnet Early Years Alliance, a federation of three Nursery schools in London.  Kelly completed her Masters in Early Childhood Education at Roehampton University and is currently engaging in research with schools and Early Years settings across Barnet and neighbouring London boroughs. In addition to ongoing research using the Tavistock method of observation, recent areas of interest include ‘Children’s drawings’, ‘Video reflection’ and Pedagogical Documentation’. Kelly can be contacted at kbrooker@beya.org.uk

Child-friendly research in the early years

What younger children really think and understand about internet safety: The value of stories and role play as research methods