My relationship with Hip-Hop is multi-layered and complex: I have grown up with Hip-Hop; on one hand it has been an educator, a source of inspiration and an entertainer (and many more things). Yet on the other hand, I cannot deny that hip-hop can be problematic. For example, when considering the view that mainstream media reflects all that is problematic with society, Hip-Hop is a great vehicle to highlight many of these issues.  For instance, when considering representation and narratives, black women are portrayed as hyper-sexualised commodities with hyper-visibility and invisibility (hooks, 1992) (among other negative depictions) and black men are generally portrayed as dangerous thugs that inflict violence on society as a whole (Jefferies, 2011).  This reminds me of sexualised symbolism where some individuals and corporations fraternise with the so called enemy at convenience (monetary) and/or for kicks (fantasy).

In saying that, it is not difficult to understand some of the reasons why hip-hop receives such bad press, with arguments ranging from inciting gang related activities to misogyny to homophobia. Yet, I am inclined to go against the grain – I like to paddle in murky waters as I believe that growth resides in messy non-binary spaces, such as the ability to acknowledge and embrace perceived contradictions – ‘grey areas’ (Morgan, 1999), as well as the capacity to see the continuum between perceived antithesis’s.  Therefore, I choose to position hip-hop as a positive medium that deserves to be further examined – how can we harness the power of hip-hop for social change?

The aim of the study was to contribute towards exploring strategies for increased intercultural intelligence with consideration to valid knowledge, creativity and critical dialogue for both student (particularly for the ‘disaffected’) and educator engagement. I can vividly remember the feeling that came over me when I realised that there is an array of literature regarding Hip-Hop culture, politics and education – bliss.

The research provided ‘rich’ data – quite overwhelming to be honest, particularly when working within a limited word count. What is really apparent is that there is a deficit of academic literature and research regarding Hip-Hop culture and Hip-Hop education in the United Kingdom (UK), particularly in more contemporary years (I can say that now as Hip-Hop has now come of age).  Much of the text that became part of my review of the literature was written by American authors and most of them were quite American-centric.  Further, there seems to be a great portion of Hip-Hop literature that places great emphasis on African-American community.  As Hip-Hop derived from the African diaspora (Osumare, 2007) – when considering identity formations, it is important to look more closely at what that may mean when considering African diasporic communities residing in the UK.  Moving forward to 2016, my journey has meant that I have had time to consolidate existing knowledge, gain new knowledge and reflect on it all.  This has led to improved understanding of the subject area, resulting in reconsiderations of how I will continue with this line of study for a doctorate degree.  Narrowing down the line of enquiry can be quite a task, however  I will get there in the end and I have no doubt things will change as I read, but isn’t that part of the process?

Through The Lens of Hip-Hop: UK Women (2014) Directed by Silhouette Bushay and Samantha Calliste [Film]. London: [no distributor] 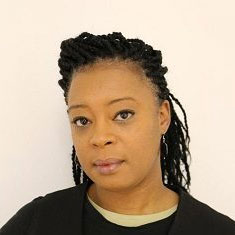 Lecturer in Education Studies at University of East London

Silhouette Bushay is a Lecturer in Education Studies at the University of East London, and a co-module leader for the Critical Pedagogies module where students engage with a variety of philosophies ranging from Plato to hip-hop pedagogy as critical/radical pedagogy.  Her research interests are broad – examples are intersectionality, hip-hop/hip-hop feminist pedagogies, student engagement and collaborative learning.  Over the past few years, she has worked within the community supporting community groups such as young people in schools and youth provisions (with and without complex needs), including working solely with young women and girls developing and delivering hip-hop feminist workshops and programmes. Silhouette is a co-director for the film documentary ‘Through The Lens of Hip-Hop: UK Women’. Having an interest in gender equality in all spaces, she is the founder/organiser of the newly established annual International Women’s Day conference called ElevateHer, sponsored by Cass School of Education and Communities at the University of East London.