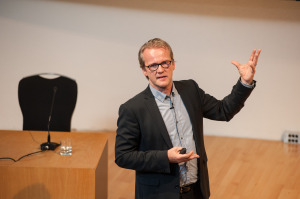 In our 40th anniversary year, BERA was delighted to welcome Pasi Sahlberg to deliver our inaugural annual lecture. Speaking on Facts, true facts and research in improving education systems, Pasi entertained and stimulated a large audience with his analsyis of how best practices and evidence-based policies have become a common mantra in educational improvement.

He outlined his theory of the Global Educational Reform Movement (GERM) arguing that international education benchmarking as a policy tool has three different manifestations. The first manifestation is ‘facts’ that typically are observations and causal beliefs from successful reforms and high performance in other education systems. The second manifestation are ‘true facts’ because they are often findings through statistical data or measured performances, such as international student assessments. The third manifestation is academic research and other systematic scientific work.

He concluded that by referring to these manifestations as ‘evidence’, policymakers can justify almost any education reform direction that they decide to implement. Because scholarly research is often considered as slow and expensive, many educational reforms today are built on facts and true facts instead.